We use the acronym STEM to indicate the four basic discipline of Science, Technology, Engineering and Mathematics.  For many, defining or differentiating these discipline is a ‘fuzzy task. How do we differentiate  the disciplines?  The boundaries blur for most whose education and experience has not been in one of those areas. Let’s use Edison’s Doll as case to understand how STEM, especially Technology and Engineering can be defined and delineated.

Thomas Edison was a prolific inventor.  Of the over 1000 patents to his credit, the talking doll is one of his more curious accomplishments. Edison had invented the phonograph in 1878 and had brainstormed the potential applications of his new technology. How could he use the wax drum recording method in a device other than a phonograph? Of the many possibilities, he thought one of particular merit. Why not mount a miniature phonograph inside a doll?  The recording could make the doll “talk!” It would be a hit with children!

In 1890, Edison set his laboratory to work on the problem. They created a large 22 inch doll weighing a heavy six pounds sporting a torso made of tin with holes in the chest to allow the sound out. 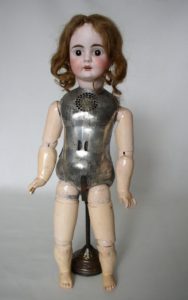 Inside was a tiny wax phonograph with a pre-recorded nursery rhyme. Eighteen young women were enlisted to speak into the doll to record the rhymes. Edison had hundreds made for shipment and sale. He would make a fortune on these dolls and please thousands of children. What could go wrong? 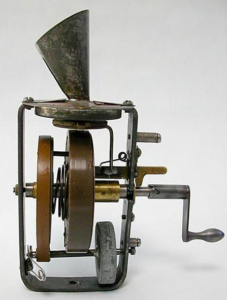 Edison’s doll was a commercial failure. It was expensive, heavy, and because the body was made of tin, had a cold and distinct mechanical feel. The doll was often damaged in shipment and the recording became garbled as the wax discs could become misshapen in warmer weather. Children were scared by the scratchy alien-sounding voice emanating from a tin doll. In a word, it was a flop. Or was it?

In a pure technical sense, Edison’s miniaturization of the newly invented phonograph was a breakthrough. The mechanism itself was an intricate combination of new technology that was miniaturized to fit in a compact space and deliver an understandable message on command. It was a technological success and wonder.

Edison was the “T” in STEM.  He was a master of tinkering and trying, adjusting and adapting materials and methods to create innovations. He famously tried hundreds, if not thousands of filament combinations for the incandescent light bulb through sheer brute force of trial and error.  Skilled with tools and mechanical insights, Edison used ideas he had read about or used others’ initial inventions and improved on their ideas. One might say that Edison had a knack for getting things to work.

To amplify that idea a bit it may be helpful to recall an incident with Bell’s telephone. Bell, like Edison, was a tinkerer and technologist as well as a deep thinker about the scientific concepts that under girded his inventions.  Bell had received a patent for the telephone and successfully rolled-out his technology to the public. Edison tried to use the phone, but was immediately frustrated by the weak sound that he got from the receiver. Edison was partially deaf and so worked with Bell’s contraption to try to improve the technology. He replaced Bell’s diaphragm with different materials to see which could deliver more sound power. To test them he attached a pin to the center of a diaphragm and then would yell into a megaphone. Placing his finger on the pin he could feel the vibration of the diaphragm. When one combination pushed the pin so vigorously that it scratched his finger and drew blood, he had an insight about how that force could be used to put pressure on something like wax.  The phonograph was born out of an extended exploration of using the pin to impress wax with sound vibrations. In that respect, Edison was no scientist. He was primarily a technologist.

Ruth and Elliot Handler introduced Chatty Cathy© in 1959. It was an instant success, sold well and continues to draw attention by collectors of all ages.  The doll was very much like Edison’s. It was relatively large, although half the weight, and spoke through a voice box in the abdomen. What made Handler’s version so successful? 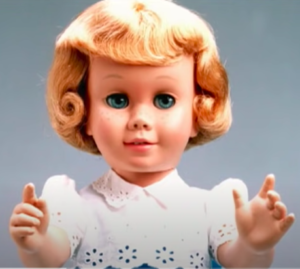 The Handlers started the Mattel toy business in their garage in 1945. Early thereafter they developed Barbie© and Hot Wheels© toys that became the most widely distributed and purchased toys of all time. Elliot thought that a talking doll could make an impact on the market and started research and development. They first had a vision for the doll that was consistent with what they knew children liked. Their experience with Barbie© gave them confidence about how their customers would view such a product. It would need to have a realistic face with a soft appearance. They hired a sculpture to copy the face of a child they knew and loved to make it as realistic as possible even down to the freckles.  Elliot worked his technicians to develop a miniature talking mechanism that was clear and reliable. The phonograph technology was now on vinyl, so the technology had improved substantially from 1890. They hired the woman who had been doing voices for popular cartoons of the era. The phrases selected were meant to be engaging, like “Let’s play,”  “I love you,” and “May I have a cookie?”  The child would pull a string on the back of the doll that would randomly recall one of 11 phrases.  The clothing was chosen specially for the doll to be easily removed and replaced. 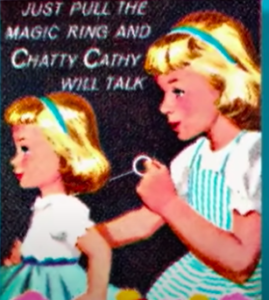 The Handlers had “engineered” the doll. Their concern was to bring something to the market and to a child’s life that was enjoyable and lasting.  It had to work, it had to be affordable, and it had to be something that the child actually wanted to play with. That is what makes engineering different from technology.

Engineers always start with the customer. Is it a city that needs a bridge, a building that needs a heating system, a manufacturer marketing a smart phone?  Their processes begin with consultations with end users. What do they want? What features do they need? What would the final product look like?  From these inputs, engineers create a vision. The Handlers had experience with their doll customers so it gave them a good idea of what kind of doll would be popular.

Engineers do extensive research to determine the kinds of technologies that are already available. Which technology should be applied? How can best materials be utilized to solve the problem? Sometimes engineering projects require modifying or adjusting a technology to fit the need. The Handlers did just that. They used existing phonograph technology to fit the doll. They had to invent a special pull string mechanism that would spin the record. The engineering solution has to work! It has to be safe for the user, not contribute to polluting the environment, and it has to last the rough treatment it may get in the hands of the user or in the wake of an unkind environment.

Finally, engineers have to create a solution that is affordable.  If the Handlers had made a great doll that filled all the criteria, but cost $100, then we probably would have never heard of the Chatty Cathy©!  Engineers have to adjust their designs so that people can afford the proposed solutions. Most any problem can be solved, but high cost will prevent many of these ideas from ever becoming reality.

This is what makes engineering so different from pure technology. Engineers have to “settle” for the best solution that meet as many of the  demand as possible. The age-old saying is that if you can hit 2 out of three aims, you are doing well!  In that respect, modern engineering is as much an art as it is pure applied science, mathematics, and technology.  For every problem there are as many engineering solutions as there are engineers!

Are you a technologist or engineer in the classroom? A teacher as technologist uses the tools provided, and technically delivers lessons by following protocols. If we subscribe to describing our work to prepare teachers as “Teacher Training” we are likely following a plan that shows teachers how to perform teaching. We provide skills and methods, patterns for behavior, and curriculum outlines that can be prescriptive in nature.

The teacher as engineer approaches the challenge somewhat differently.  The job begins with thinking about the students and parents. What do they need? How do they learn best? What materials are most efficacious? The teacher then does due diligence to see what curricular material and technology is available. Will it be helpful in addressing the needs of students? If not, can we afford to purchase new print materials or media?  After delivering lessons, the teacher engineer makes adjustments.  Is the design working?  Are students safe and enjoying the experience? Are students growing and learning? The work of teaching becomes a combination of technology, scientific principle, and the fine art of finding the best combinations that work best for students.

Like Edison’s doll, we can produce something that technically fits the definition of teaching,  but it may end up being cold and mechanical. Like the Handler’s  Chatty Cathy©, teaching should be an act of engineering where we seek to solve the problem considering our student customers and then applying the best methods and environment that will encourage and grow the next generation