When Bell’s telephone hit the market, people were eager to try it. Edison was one of those first adopters, He was notoriously hard of hearing and it is reported that when he tried to hear the telephone he complained bitterly that he could not hear it well.  As a result, Edison looked at the design and started to see if he could improve upon the initial patent.  He started with the cup and diaphragm.  How could he improve this so that more of the sound energy could be converted to mechanical energy?  He experimented with many designs and materials and used a simple system to check the mechanical movement of the diaphragm.  He placed a pin on the end of the diaphragm and put the tip of his finger on the point. 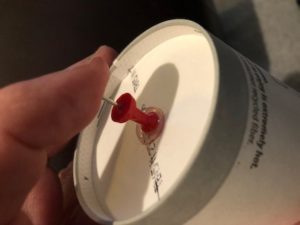 One of his diaphragms was so successful in moving sound to mechanical energy that the pin prick caused his finger to bleed.

This gave Edison a grand idea. If sound could be converted to that amount of mechanical energy, perhaps it could indent a media differentially. Those indentations could be then picked up by the same pin and diaphragm and reproduce the original sound. The phonograph was born!

You can follow either of these guides to build a record player:

Your students can see the impact of the pin and diaphragm by assembling a simple  phonograph.

1) Start by having students glue a push pin or thumb tack to the base of a cup. Without giving them the complete story of Edison, above, have them do the experiment he did and sense the vibration of the tack on their fingers. Then see if you can nudge them to understand that sound energy is being transformed into mechanical energy. If we could use that mechanical energy, what could we do with it.

2) Conversely, what happens when we run the tack over our finger while we have the cup on our ear? Then we have mechanical movement of the pin attached to the diaphragm moving air and creating sound.

3) To operationalize this into a simple technology, follow the steps below to create a phonograph.

We will be making a phonograph that looks like this: 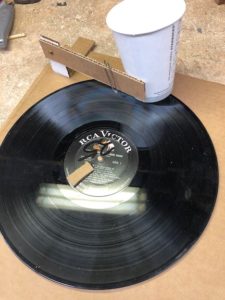 A. Cut a cardboard that is large enough to easily surround a record. Place a smaller round piece of cardboard in the middle of the board.  Glue a 1/8th inch short dowel into a hole that goes through both cardboards as shown below. 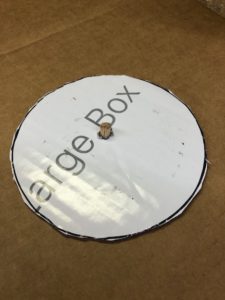 B. Glue a angle bracket out of cardboard that looks like this. Each arm of the angle is about 2 inches in length. 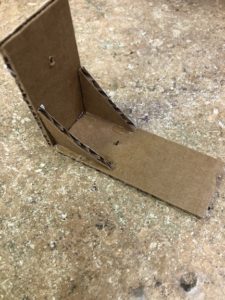 C. Attach the cardboard angle to one corner of the large cardboard with a brass fastener. Make sure it can rotate freely. 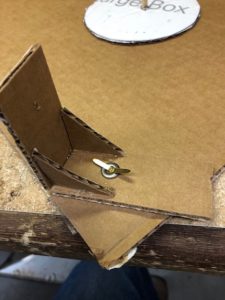 D. Attach a push pin to the bottom of a paper cup with glue. 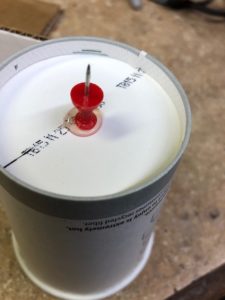 E. Attach a cardboard arm to the cup as shown below. 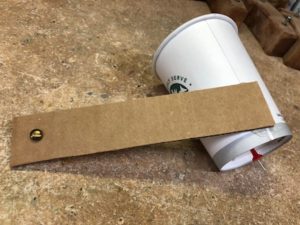 F. Attach the other end of the arm to the cardboard angle so it looks like this: 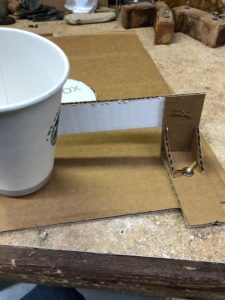 You are now ready to test your system! Place a record (make sure it is something you don’t mind ruining!) on the cardboard and dowel. Set the cup down on the record and spin. It might sound something like this…

Or, a simpler method, and an old Mr. Wizard here:

https://www.youtube.com/watch?v=HJa6Ik6xmiU (Links to an external site.)

PLEASE RESPOND:  Did you make a phono?  How did it sound? mjaeger@eou.edu