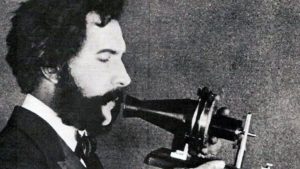 Alexander Graham Bell is one of the most well known of inventors. We associate his name immediately with the telephone because he was the first to successfully patent a model and thereafter build a powerful telephone system that bore his name for almost a century. Although there is controversy about whether Bell actually “invented” the telephone, there is no question that he made significant contributions to its development.

Bell was keenly interested in the deaf. His father taught speech and elocution, his mother was deaf, and he married a deaf woman. Bell was a personal friend of Helen Keller. He experimented and tinkered with technology to try to find ways to help those hard of hearing and the deaf.

As a young person, Bell first experimented with sound by using his own deep and resonant voice. He would talk to his deaf mother by speaking close to her forehead. He and his brother also experimented with the family dog and built a speaking machine.

At age 24, Bell began his formal work as a teacher of the deaf. At the time it was a revolutionary idea to try to teach the deaf to speak. Using a device his father had created that graphically showed the effect of speech on a flame, Bell worked with many deaf students to help them learn to speak.

Convinced that there must be technology that could transmit speech, Bell learned all he could about physics and electricity. He tinkered first with the telegraph–a technology that was as common at his time as the telephone is today. He surmised that the telegraph could be made to send more than just dots and dashes.

One day, while experimenting with the telegraph, he and his working partner, Thomas Watson, heard a “twang.” The telegraph made a sound much like a voice. They immediately saw the potential of modifying the telegraph to transmit voices. For ten months, through many trials and experiments they struggled to make their idea work.

It is unclear exactly what happened, but the story is told that one day as they were experimenting, Bell spilled some acid. Panicked, he called to Watson in the next room, “Mr. Watson, come here, I want you!” Watson heard him through the apparatus. The acid that had spilled into the mechanism was the variable they needed to make it work.

Every inventor stands on the shoulders of giants. They either improve on or move to the next step in understanding how to adapt technology or how to employ a new science concept.

PLEASE RESPOND:  Have you ever invented. anything?  (Remember, it could be just an improvement, not a novelty!)