The transformer you made is essentially the same as the manufactured version, just a little rough : ) 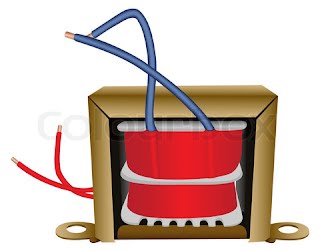 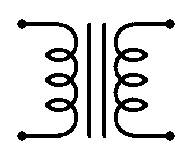 To see how a transformer works, examine the diagram below. There is a battery and switch on the green wires and a voltmeter that can swing from positive to negative on the other. (This kind of meter is called a galvanometer).
At the start of the cycle, there is no current flowing in either set of wires, 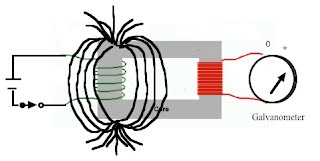 When we shut off the current, the magnetic field on the green wires collapses. Like the tide receding at the ocean, these receding lines of force once again cut across the red wires in the opposite direction. This causes the meter to swing in the negative direction.

The transformer allows us to move current in an isolated way, that is, we can affect the red wires without touching them. Simply by influencing them with magnetic lines we can cause current to flow.
For a more detailed explanation of the transformer see this video.

PLEASE RESPOND:  Ok, two coils interact and communicate through electromagnetic fields. What application, besides Bell’s metal detector might this have?  mjaeger@eou.edu
Move on to next exploration