Step 7. Once you have found the “null” or quiet place, try placing a piece of metal into the spot of the overlap. You could try a spoon, a coin, or a bullet (if you have one!) 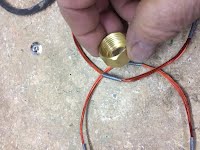 Does the tone change or reappear?
This is Bell’s metal detector circuit that he used on Garfield.  The actual apparatus is shown in diagram below and similar to what you have just made: 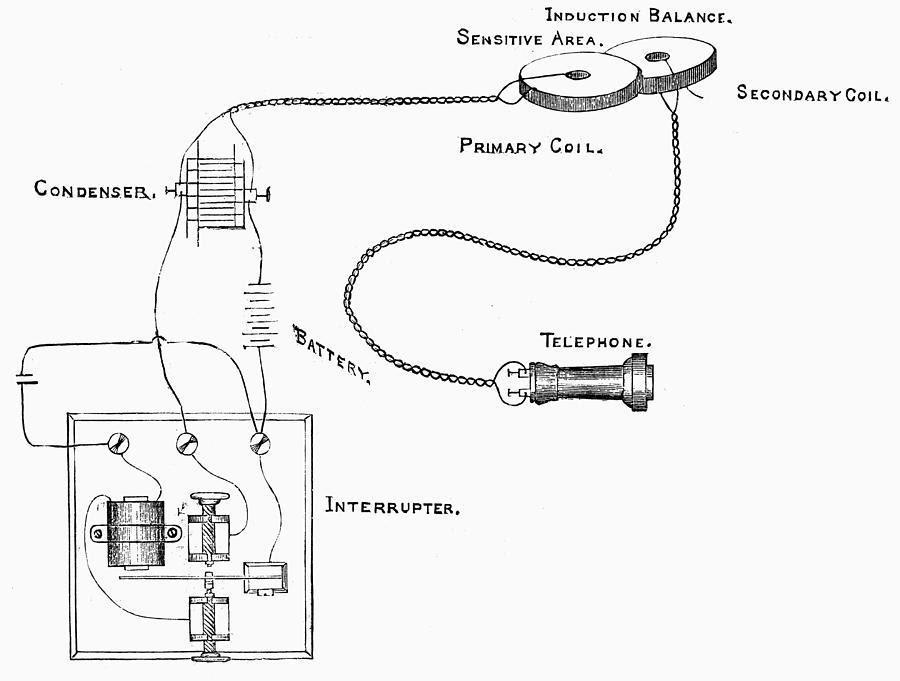 Bell used an interrupter (buzzer) instead of a motor–but it had the same action of chopping up the electrical current. His interrupter made so much noise that it had to be placed in a separate room!
Revisit the end of the story that describes Bell and Tainter’s attempts to locate the bullet:

“By July 24, talk about the necessity of finding the bullet had begun. Garfield’s wound oozed with yellow pus and his fever spiked to 104 degrees. Bell’s equipment was ready and the doctors requested him to try to locate the bullet. On July 26th, Tainter and Bell arranged the system, now called an induction balance, by Garfield’s bedside in the executive mansion. Even though it had worked perfectly in the lab, in the president’s bedroom it made a sputtering noise. The doctor urged them to hurry as he was worried about tiring the President. Bell wrote in his journal:  July 26.  He …is of an ashen gray color which makes one feel for a moment that you are not looking upon a living man. It made my heart bleed to look at him and think of all he must have suffered to bring him to this.I feel woefully disappointed and disheartened–However, we go right at the problem again tomorrow.” A.G. Bell

Bell thought the problem might have been loose connections so they put the whole apparatus in a wooden box and made other refinements. They worked on the President again on August 1. The second try was a disappointment as well.  Instead of sharp clear sounds they could detect only weak tones over a large area. From Bell’s perspective, the information was of little use. He wondered if metal in the president’s bed had interfered with the test.  The doctors, however, thought the test confirmed their ideas about the location of the bullet and gave out positive reports to newspapers. Bell and his team continued to refine the device until they were sure it worked. Bell again asked for permission to locate the bullet but he was not allowed to try again.

President Garfield died on September 19 of infection from his wound. Bell wrote in his journal:   Sept. 20, 1881.Poor Garfield has gone. I hope indeed that there may be an immortality for that brave spirit. A.G.Bell

Even though Bell’s induction balance did not save the life of President Garfield, it did become the prototype of all future metal detectors. His revised design saved many lives as it was used for decades by battleground surgeons to find bullets in wounded soldiers. Metal detectors were also used to locate land mines and unexploded bombs.

RESPOND: Can you comment on why he had trouble finding the bullet with this device? Did you have any of the same observations that they did in your experiment?  mjaeger@eou.edu

Move on to the next exploration